John Dickson from CPX recently posted a diagram illustrating, as he put it, why it’s dumb to say that religions are ‘atheists’ about each other, and that Atheists “just deny one god more” (as has been said repeatedly by Hitchens, Dawkins, Krauss, FitzSimons, et al., and many online warriors since). 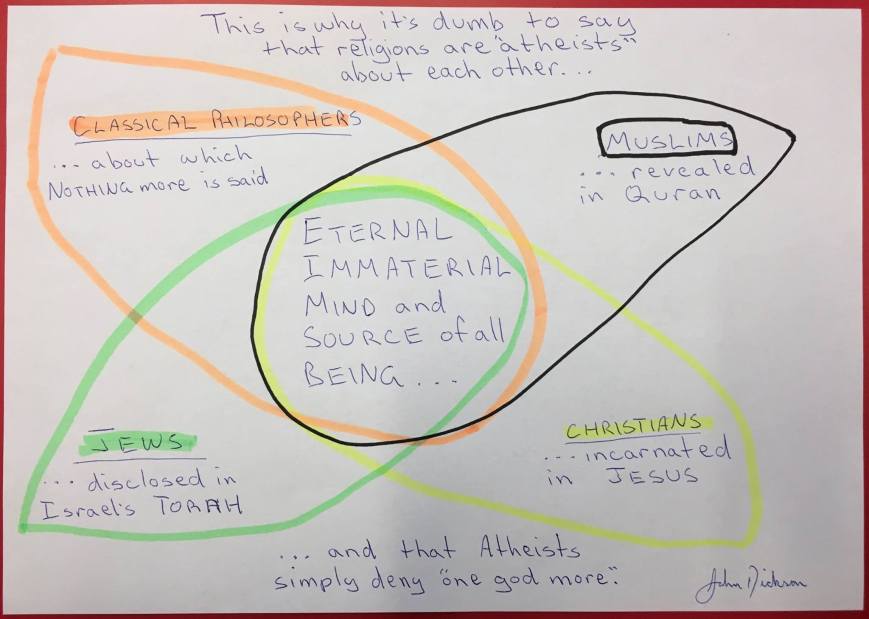 I was involved in the ensuing conversation, and it seems the point needs more elaboration for some.

The main point is that God in the Judeo/Christian tradition is utterly distinct from gods of polytheistic pantheons such as the Greek/Norse/Egyptian/Aztec traditions. It’s not an issue of specific attributes, it’s an issue of being an entirely different category. So when I hear (as I did in this conversation), “God is a god, Mercury is a god and Thor is a god, they all may have different attributes but they are gods none the less,” this only indicates to me that the person saying it has no understanding of any of the key words in that sentence. God is not a god.

Here’s what the OED has to say about “god”:

1. (in Christianity and other monotheistic religions) the creator and ruler of the universe and source of all moral authority; the supreme being.

2. (in certain other religions) a superhuman being or spirit worshipped as having power over nature or human fortunes; a deity.

These are two different definitions, designated (by the 1. and 2.) as independent meanings of the same word.

Here’s the OED definition of “star”:

1. A fixed luminous point in the night sky which is a large, remote incandescent body like the sun…

3. A very famous or talented entertainer or sports player.

Let’s imagine a hypothetical claim based on those definitions:

Yes, of course it’s a strawman, that’s not the point. The point is that no one with a passing familarity with both entities would confuse a thermonuclear fusion reaction with a really good tennis player. And it would be really dumb to compare them. Because they are such totally different kinds of things.

Likewise, anyone who thinks that an Eternal Immaterial Creator Mind is in any way similar to Thor or Osiris really doesn’t understand what they’re talking about.

Copyright for all material is retained by the author (apart from referenced quotations). Reproduction in part or in whole without the expressed consent of the author is not permitted.
%d bloggers like this: